It’s Easy To Get Off Track In Your Spiritual Discovery

I believe in the God of our founding forefathers of the U.S. Many of those men were Freemasons, and though some people say that Freemasons do not really know God, I say they probably know God better than those who say otherwise. Before going into battle, George Washington, a Freemason, would kneel and pray to God the Father and Jesus Christ the Divine Son. Most of the designers and signers of the Constitution prayed for wisdom and guidance, including Thomas Jefferson, who made a pretty good deal when he purchased the Louisiana Purchase. Benjamin Franklin, John Adams, and Alexander Hamilton also were men of faith and prayer, looking to Christ as their Lord.

Some men and women try to discredit many of these Founding Fathers because they were not perfect. However, whatever their human flaws and imperfections, these Founding Fathers’ names are carried on in history for their contributions to formulating the foundation of this nation, which is based on the ideals of democracy. Are the names carried on of those who completely condemn these men? I doubt it. If they are, they have names like Marcus Brutus, Judas Iscariot, and Benedict Arnold, who are considered in history as traitors to trusted friendship and loyalty to ideals of what is good and right.

The American forefathers did not pray to Brahma or Vishnu or Shiva; they prayed to God the Universal Father of All and to the Son of Man-Son of God, Jesus Christ. Most of them had a higher understanding of Jesus’ true teachings, which influenced their vision of “one nation under God.” And that part of Christianity, which advocates and practices the true teachings of Jesus, has brought much spiritual moral, ethical, and social advancement to other peoples and nations.

Tell me, which country is more advanced in all areas of society, the United States or India? Not that I have anything against India, but it certainly has many more political, social, economic, and health problems than the U.S., which does have its share of problems too.

Like Hinduism and other evolutionary religions, Christianity has many doctrines and practices that are not Jesusonian or representative of true spiritual principles. When it ruled India, the British Empire brought both the good and the bad parts of Christianity. India did not fully accept the higher actual teachings of Jesus and implement into its national values because Christianity was considered “a white man’s religion,” which, in the Indians’ eyes, did more harm than good. As a result, the true teachings of Jesus did not become a part of the social fabric of India, and the country suffers from much more religious confusion, extreme poverty, corruption in all areas of society, and internal strife than the U.S., which still has some Jesusonian principles within its national consciousness.

Unfortunately, many in leadership positions in the U.S., including politicians, have deviated from the original intentions of the Founding Fathers, but there are still basic tenets of Jesus’ message of the Fatherhood of God and the brother-/sisterhood of all humankind, which influence some more progressive national leaders in forming policy and legislation that improves the quality of life for all citizens.

Today millions of Americans (young and old alike), who have been turned off to the non-Jesusonian part of Christianity, are attracted to Hinduism and its Sanskrit and Hindi words (some that are about twenty-six letters long) and think of them as more holy or more sacred or more truthful than the words “sanctification” or “repentance,” which are very much a part of Christianity.

As is the case with all of the world’s large evolutionary religions (including Christianity), there are many levels of understanding and consciousness within Hinduism. Hinduism has about 33 million gods, with a god for just about everything. Some sects of Hindus are very primitive, fear-based, and superstitious in their beliefs and practices (as are some Christians) and have not evolved much beyond what their ancestors believed hundreds or even thousands of years ago. And then there are those in Hinduism who believe in one God with multiple manifestations of lesser gods, demigods, and spirits.

As The URANTIA Book says: “Today in India, the great need is for the portrayal of the Jesusonian gospel . . . divested of the Occidental [Western] dogmas and doctrines.” This would be the “vitalizing spark,” which could cause a change in the national consciousness to evolve out of the caste system and other lower understandings of reality. Thus, people would not be starving while feeding their fat cows that are sacred to them, believing them to be a symbol of one of their gods or thinking the cow might be their grandmother or grandfather.

Many evolutionary religions do not understand the activation of the Spirit of Truth or the Holy Spirit of the Mother, which actively ministers to those who are aware and receptive. There can be some understanding of the Universal Father, which Hindus call Brahma, but most have no personal relationship with the Universal Father to the degree that they should, and so there is a sense of less accountability for wrongdoers, for they have no personal God to answer to.

Throughout the millennia it has been the practice of Hinduism to accept almost any doctrine or religious belief that comes its way, whether it is spiritually truthful or not, thus the many gods and variety of teachings, which span the gamut of superstitious, primitive beliefs to teachings that are quite advanced in philosophy and cosmology.

Hinduism is a religion of relativity, meaning that, unlike many other religions, it does not have absolutes in relation to spiritual truths, including the universal laws of morality and ethics. Most gurus who come and go do not necessarily teach their children and students what is right and wrong, so anything goes. Most other religious systems have some form of a code of ethics, as those in Judaism, Christianity, and Islam do with the Commandments given to Moses at Sinai.

The Commandments or something very similar are for all religions. Gurus, like Osho and many others, have led millions astray by inventing a so-called easier way to Paradise. That is what Lucifer did in his manifesto, which resulted in the Lucifer Rebellion.

Osho taught a lot of really good things, with one big lie, which threw millions off track of their own destinies. And that one thing is the allowance of fornication, which he called being a sannyasin—another offshoot of a Hindu teaching. He taught it is OK to have sex with anyone you desire, outside of marriage or love and commitment. If you have the urge with someone, get together. And they did—thousands of them, but they did not discover the fulfillment and peace promised. Instead they ended up with a restlessness and dissatisfaction with life, a sense of emptiness and never having enough. Going against the universal laws of God causes much harm to people’s psyches.

Today many women and men do not want committed relationships and, if married, want open marriages, which is not really a marriage. This lax attitude towards the value of loyal marriage, family, and home causes emotional distress and trauma in the lives of those who practice it and their children who are raised in it.

Those who are not aware of higher spiritual truths are not condemned to some kind of hell that God has supposedly set up, but they could possibly miss their destinies for this life by not knowing who they are as children of a personal, loving God and staying on the Tao (the Way) of a more fulfilled and happier life. Jesus said, “I am the Way, the Truth, and the Light.”

The Universal Father is not only the God of the United States of America, but of all nations on earth. The U.S. Constitution allows people from all religions to immigrate here, and they have from all over the world, and are accepted as part of this country, which our forefathers had envisioned.

Religion cannot be forced on anyone. The true God has to be revealed to others through manifesting the fruits of the spirit, which are: love, joy, peace, tolerance, gentleness, goodness, faith, loyalty, and self-control. These are the ideals of America, as reflected in its Constitution and in many of its citizens. It is these traits that have drawn people to this country like a magnet, and they are the same traits that drew people to Jesus when He walked on this planet 2,000 years ago.

When we forget who we are, we forget to be like He was, and our children begin to look for those 26-letter words they do not really understand but think is a higher truth. So our children look into Hinduism and other religions and ideologies because they do not see Jesus’ fruits of the spirit in their parents or families. All they see is fundamentalism and the legalism of the law of God but not the grace and beauty in a relationship with the living God.

Who is Jesus coming back to, when He returns? Christians? And if so, would it be the Protestants or Methodists or Baptists or Pentecostals or the Charismatics or Catholics?

Too many Americans today, and other Christian fundamentalists around the world, really know nothing about the true nature of God and universal spiritual truths. We Americans have to think beyond our own doctrines and move on, or else our children will move on to something that looks good on the outside but does not work on the inside, nor does it help our children to meet their individual destinies, that their Father in heaven has designed for them.

It is not really about being a Christian or a Hindu or a Buddhist or a Jew or whatever. It is about being a child of God and, as The URANTIA Book says, just being an ascending son or daughter of God. We can throw the isms away, because once you get into an ism, you get into a lot of false doctrines, and you definitely will get lost in them. Then you start studying those 26-letter words, which will take you away from the true essence of God’s will for your life, like being on a ship that has no destination, sailing forever in your delusions and relativity.

Start asking God for absolutes in your life. They are easy to find, because they are already written in your heart. Stop trying to make your own god and just surrender to the One who created you and everything else there is. 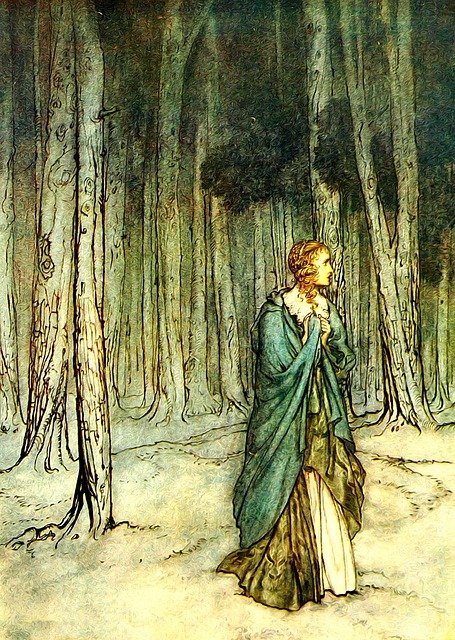