The White Baby Boomers' and X-Generation's Responsibility. (The Once Middle Class), The Cry of the Indigenous, And The 99% Movement

When I was a young man in my late twenties, I went to a sweat lodge facilitated by a shaman in Pittsburgh, Pennsylvania, who was a Taino native from the tribe where Christopher Columbus landed in Central America. I told him about a book I was reading by two white Harvard graduates and pointed out a part in the book that talked about some seagulls showing up over Columbus’ ship and guiding them to the landing where the Taino lived. They attributed this to Manifest Destiny—God. The shaman corrected the theory and told me that this so-called “manifest destiny,” perpetrated by the white powers, meant the deaths of millions of indigenous and the suppression of them for hundreds of years until this day. I did my own research, and the shaman was correct, of course.

Those imperialists and colonizers from Europe liked to believe that God was with them as they shed the blood of the innocents throughout history. American imperialism has been no different. The power-elite had allowed for a middle class, so that the people would not totally rebel from the power-elite’s greedy control. Somewhere along the way, the power-elite became so greedy that they lost sight of the fact that they could not have everybody against them, that a middle class was needed who were comfortable with a home, a car, enough money to put their kids through college, and possibly even an extra home in the mountains or a boat to take out on weekends. This is called The Great American Dream.

I was from a lower-middle-class family, born and raised in the inner city that, over the years, became more of a ghetto of racial boundaries by the time I was in my late teens. From ages 1 to 12, the homes shared “party walls,” where you can hear the activities of your neighbors next door, on both sides. In the back was a junkyard with rats as large as small dogs. From ages 12 to 22, my very small backyard was surrounded by a saloon behind my house, a liquor store on one side, and a warehouse on the other. I knew something was wrong with capitalism when I ventured out to the suburbs or other areas of the city that were more prominent. I dreamed about living in one of those homes with a swimming pool and big yard.

Even though I had straight A’s in grade school and junior high, I was not accepted in a better academic high school because the education board said my A’s were “equivalent to C’s” by their standards. So I was sent to an all-black high school where I was often the only white kid in my class. I got to know very well the oppression of the blacks and identified with them in many ways.

Those in the political Tea Party claim that anyone can lift themselves by their bootstraps and become “successful” in making money, maybe even becoming a millionaire. Most of those active in the Tea Party movement have never lived in an inner city ghetto or on an impoverished Indian reservation. Most “Tea Partiers” are not black or red or brown and have no idea of the struggles and oppression and marginalization still suffered by many blacks, Native Americans, or Latinos in this country. Always these people of so-called “color” have had to live with this disenfranchisement. Herman Cain, who briefly was one of the Republican candidates running for the presidency of the U.S. was the more politically conservatives’ example of a black man who had pulled himself up by the bootstraps and accomplished The Great American Dream. But Mr. Cain, on the inside, is more “white” than Ronald Reagan in his thinking, consciousness, and politics.

No matter what color individuals may be, if they are part of the power-elite—the corporate powers and the banking system that control this country and world—they are the same Christopher Columbuses that will land their ideology on the doorsteps of the marginalized people all over America and the world, because they are still looking for gold. They come in the name of peace and prosperity but want to put you and your family into bondage and slavery and rape your pocketbooks.

When the once-middle-class and their college-age children were able to obtain that Great American Dream, they did not notice and said nothing about the suffering of the marginalized, poor, and disenfranchised. Just a few of them joined the ranks of Martin Luther King, Jr. and other civil rights leaders in marches in America. Most of them sat home and watched the civil disobedience on their televisions.

Today the Occupy/99% movement is just another television show to those who are still comfortable in their American Dream, like a reality show that they can watch while they eat their dinners and drink their wine. The difference is that some of their children who cannot pay for their school loans or get jobs are on TV now, demonstrating in the Occupy/99% movement. Actually, the corporate media coverage of this movement is rare and misrepresentative, so only the parents who have learned to use the Internet or those who have satellite and can watch alternative programs like Free Speech TV and Link TV can see what is really happening in the Occupy/99% movement across the nation.

It is these millions of once-middle-class Americans, who still have enough money in the bank to retire, that need to really join the Occupy movement. They are definitely a part of the 99%, but they are not affected yet—just their college-age children are. Unless these Baby Boomers do what needs to be done to bring the corrupt parts of the system down, the Occupy movement will not succeed until all Baby Boomers’ money is gone. And that could be sooner than they think, if a total economic collapse happens.

There is no George Bailey (played by Jimmy Stewart in the classic movie, It’s A Wonderful Life)—you know the banker who made sure all the people got their money back. No, when the banks take all your money—as the old baseball broadcaster would say—kiss it goodbye!

What Baby Boomers and some of their children who have been able to find jobs have to do now is consider quitting those jobs, if they are working for banks, weapons factories, nuclear plants, and other unethical, unsustainable companies. This will be the only thing that will bring down the greedy banking system and the military industrial complex.

Different forms of energy to power cars have been invented for years, but the powers-that-be will not let that information out and stop or slow up all production of alternative energies. Even implementing solar energy is priced so high that hardly anyone can afford to use it except those with extra money, and when the electric companies give a deal to the common man, they take half the energy for themselves. No, there has to be a national strike by people in all walks of life who work for the greedy system, for the fallen system. It does not serve humanity any longer.

All people need to see themselves as indigenous, in the sense that the issue is not a matter of black, brown, red, yellow, or white anymore; it is a matter of the “have’s” and the “have-not’s.” The power-elite has always made it an issue of color in order to keep division among the 99%. The 1% are the puppet masters, and we all, regardless of race, have been the puppets.

I can believe in a manifest destiny led by the Creator where all people—black, brown, red, yellow, and white (a true melting pot)—are treated equally, are given free, quality education and healthcare, and who have equal opportunity to meet their God-given destiny. Unfortunately, this is the ideal manifest destiny that never ever happened in Turtle Island, called America, and in North or South America, called the Americas.

My father—who was a Marine and war veteran who fought five years in the Pacific—was a steelworker and was forced to retire in his late sixties, losing half his benefits, both financial and medical. So did thousands of other steelworkers. He worked for Jones & Laughlin. I bet you that family did not lose any benefits. My father died in his seventies, and my mother now is in her eighties and can only afford to live in a very small, two-room apartment in a high-rise building. My parents never owned their own home. They never had enough money to put down on one. Even under the G.I. bill, my father could not save up enough money for the down-payment. It was minimal, but to him, it took food from his two children’s mouths, and he was living paycheck to paycheck. When my father died, my mother had to give up her five-room duplex in the suburbs with a nice little yard because my father’s pension would not adequately take care of her bills. This happened, I am sure, to thousands of other wives of steelworkers who were also veterans of not just the Second World War but the Korean and Vietnam Wars.

We can no longer allow these kinds of atrocities to happen in America. We have to act, and we have to act now. There has to be a Spiritualution consciousness shift, meaning you have to trust the Creator to lead and guide you, once you quit those jobs that are not serving humanity in the highest way. You have to find each other and form financial support groups, communities growing your own food.

This is a revolution of consciousness, where people are waking up to the control of the power-elite over them. But the power-elite will not give up their power easily. If enough millions of people do go on strike and join the Spiritualution movement and trust the Creator to lead and guide them, a peaceful change-over of policies in this country can happen, because the power-elite will begin to lose money or they will have no employees to serve them in serfdom.

When millions of people:

If this happens with millions, then those in power will be willing to make a deal, without Monty Hall.

The success of the many-years-old TV program “Let’s Make A Deal” was based upon consumerism and people lusting for those things. Didn’t the players look silly jumping up and down when they won an appliance or even a car, like an angel came down and said, “Here’s the ticket to Paradise!”?

No, Baby Boomers! No, American public! No, Western civilization! It is time for a real change to happen. No President is going to do it for us. We have to do it, millions of us, everywhere. And it can start with you when you really ask the Creator to be your conscience, your friend, and your guide. Go on strike!

Lest we forget: “In God We Trust” is the United States’ official motto. 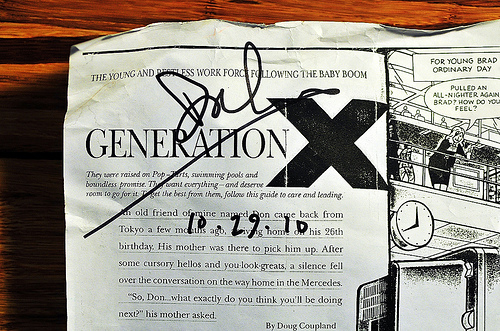